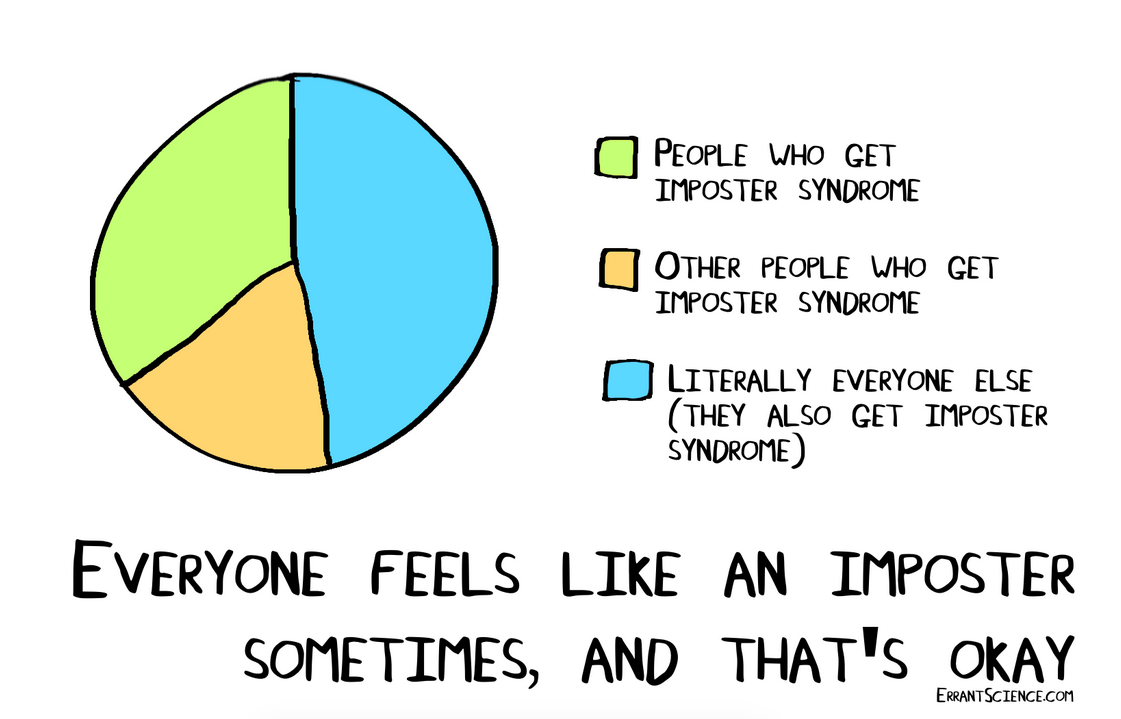 Have you ever felt like a big old fake at work? That you don’t deserve success and could be exposed as not having a clue what you’re doing? If so, you’ve probably been experiencing a psychological phenomenon called ‘Imposter Syndrome’.  It’s an awful mix of fear, underconfidence and self doubt that’s surprisingly experienced by lots of people. It’s believed that 70% of us suffer from imposter syndrome during their working life – and it’s doing no of us any favours, especially professionally.

With imposter syndrome, no one is immune. It’s not just those new to a role or at the start of their career that it strikes. People who are really thriving at work and considered successful are equally susceptible, in fact, the better you are doing the more opportunity imposter syndrome has to rear its ugly head and smack you in the face.

Ok, some context. Angelou is at the top of her field and is publically recognised as hugely successful. She’s been nominated for the Pulitzer Prize, won five Grammys and is an acclaimed author - yet imposter syndrome has still wiggled it's way it. If you’re a sufferer, be comforted that imposter syndrome rarely reflects reality – it’s an emotional hotpot of all the irrational beliefs and fears we have about ourselves.

It was the 1970’s when psychologists first identified imposter syndrome, but it’s still around today, perhaps thanks to our economically unstable, highly competitive labour market. As a career coach I’ve had numerous clients bring their imposter into the coaching room.

I’ve coached a marketing CEO who told me she once left midway through a meeting to read a copy of “Marketing for Dummies” she keeps in her car. A management consultant who believed at any moment a colleague could suddenly say, “What the hell are you doing here? You can’t do this job, let someone who knows what they’re doing take over” before escorting her from the building.

This particular ‘being exposed’ scenario is a common one for those with imposter syndrome fear and play out mentally. Artist and musician Amanda Palmer described a similar fear of having someone knock at her door and finding her out - "I call these fictional people the ‘Fraud Police’ and they're just going to tell you: 'We figured it out, and we're taking it all away.'"

These are quite shocking examples but I’ve also seen imposter syndrome manifest more subtly, in ways that might also be holding you back from achieving career happiness.

I meet experienced professionals totally tongue tied when asked to identify skills and strengths they use every day successfully at work. Or when they are able to identify them, very quickly attribute them to external forces. I’ve seen CVs brimming with evidence of ability and accomplishment but described as being down to luck, or timing, the input of others or result of good blagging. This mind set won’t help us perform well at interviews or in networking situations, when succinctly and confidently being able to tell someone what we have to offer can open doors to new opportunity.

The bad news is, if you’re a sufferer it’s not likely you’ll ever be able to fully rid yourself of imposter syndrome. But the good news - there are ways to beat it!

Tina Fey shared her approach to tackling imposter syndrome saying; “you just try to ride the egomania when it comes and enjoy it, and then slide through the idea of fraud.” Here are my thoughts on how to banish the imposter and embrace your worth.

Perfectionism is imposter syndrome's perfect partner, accept that sometimes good enough is, well, good enough. Being kinder and more accepting of ourselves could be the first step needed to banish imposter syndrome and allow us to really flourish professionally.